Laxmi lives in Pune with her family. She was diagnosed with chronic kidney disease in 1992. She started with conservative treatment, but by 1997 her creatinine level rose to 10 mg/dl. Her doctor then advised her to either seek a kidney transplant or start dialysis, as there is no other treatment for end-stage renal disease. Laxmi opted for kidney transplant. Her younger brother was a good match, and donated his kidney.

Laxmi's transplant failed after three and one-half years, and there were no other kidney donors available in her family. She was then put on hemodialysis, as an emergency treatment but had two fistulas fail. Subsequently, she became extremely ill and was bedridden for six months. She could not eat and had severe weight loss. Laxmi's doctor then advised her to initiate continuous ambulatory peritoneal dialysis (CAPD). 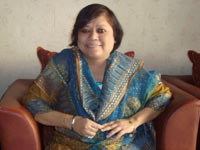 Initially I was reluctant, but I had no alternative, so I went for it. I remember the day as it marks the begining of a new life for me - the 10th of December, 2001 that I started CAPD. It worked like a miracle for me. I went back to work, I felt so much better and I regained some weight. Now, I perform the dialysis exchanges on my own and have been doing it for nine years.

Laxmi now does a CAPD solution exchange three times a day, and her clinical coordinators come every month to guide her on dialysis and diet.

After starting on CAPD Laxmi began traveling again, visiting Muscat twice a year for a period of 10-12 days each time, and she has been to Goa, Mauritius, Ooty, Darjeeling, Bangalore and Shirdi for short holidays. She also helps her sister run a beauty parlor, and feels well.